Do you often overeat in the presence of a delicious meal? It is absolutely natural. We are all prone to binge eating sometimes, especially when the weekends offer us various temptations. Although binge eating sometimes seems to be a natural habit, the tendency to throw up after eating hints at issues like bulimia. This eating disorder is often seen in people who have family or close relatives suffering from the same disorder and can be due to genetic influence. Bulimia leads to stress, anxiety, and in extreme cases, suicide. It is critical that you seek medical help if you come across any such symptoms. While the problem can be serious, proper cognitive therapy can rescue you from such adversities! You should not feel the need to throw up after overeating as this can be dealt with by much healthier means.

Bulimia is a dangerous eating disorder involving overeating in the form of binge eating followed by purging. Binge eating refers to excessive indulgement of high-calorie foods in a short span of time or in a stipulated amount of time. This is followed by purging, the act of attempting to get rid of the consumed food. Generally, the patient tries to vomit after eating or consume laxatives to initiate the process. The type of bingeing involved in bulimia is characterized by sneaking intake of food either in a planned or unplanned manner and is often reported to take place in a completely different state of mind of the person suffering from the disease.

The exact cause behind this disorder is yet to be cultivated. However, it is more commonly seen in women and girls in their adolescent or adult years more than their male counterparts. Bulimia is believed to develop due to both biological and psychological reasons. The biological reason involves genetic influences stemming from an eating disorder of a family member. It is also common among people who have remained overweight or suffered from obesity in their childhood. As much as it can have biological triggers, this critical eating disorder also seems to emerge from substance use disorder, anxiety or even depression. It can be caused by environmental stressors that largely affect the emotional health of a person. Its victims often feel low and bear negativities about themselves. Individuals who are extreme dieters are often victims of this unwanted disorder, where the danger lies in severe calorie restriction, leading to worsening health conditions.

Bulimia comes with a series of dangers to our health, as already mentioned above. Biological and emotional functions are disrupted and can begin to decay our quality of life. Symptoms of this disease can be identified as follows: 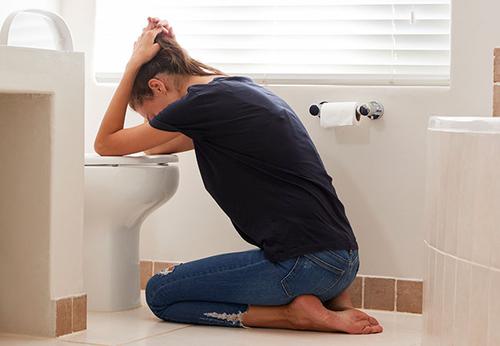 This life-threatening disorder must be treated at the earliest stage or when symptoms arise. The following treatment methods can reduce the risk of developing bulimia in patients:

Bulimia which involves throwing up after eating is an extremely painful disease. It must be treated as soon as possible in order to lead a healthy life. This condition not only affects biological functions in a detrimental way but deteriorates the psychological condition. For a healthy life, you need to take all the necessary precautions!