The Phenomenon of Arms Going Numb in the Night

Everyone has at least once in their lifetimes, experienced arms going numb in the night. Sometimes, they notice it when they wake up and feel pain or tingling sensations in their arms and hand or sometimes the pain wakes them up from a deep sleep and they shift position to avoid it.

If it happens once, it is a startling experience, but if the frequency increases, it gradually shifts from startling to annoying and painful. With an increase in frequency or severity, it begs the question of whether the person should be worried about an imminent illness or if it is something that is of no medical consequence. It all depends on the cause that leads to arms going numb in the night.

Causes Of Numb Arms in the Night

1. Sleeping on Your Arms

The most common cause of the tingling sensation or numbness in hands while sleeping is due to sleeping on the arms. Sometimes people have a tendency of sleeping face down on the bed. This in itself is not harmful, but in this position, during sleep people tend to put all their weight on their arms and hands for long periods, which leads to compression of blood vessels and nerves in the limbs. The decrease in the blood supply leads to the production of factors that causes pain and compression of nerves causes the limb to become numb as their signals to the brain to decrease.

Sometimes people use an awkward sleeping position, which might be comfortable for them but eventually might lead to compression of blood vessels and nerves. This is similar to the cause mentioned above i.e. sleeping on your arms. Sleeping in positions with your hands tucked under you check or pillows leads to nerve compression and eventually to numbing of arms and hands. 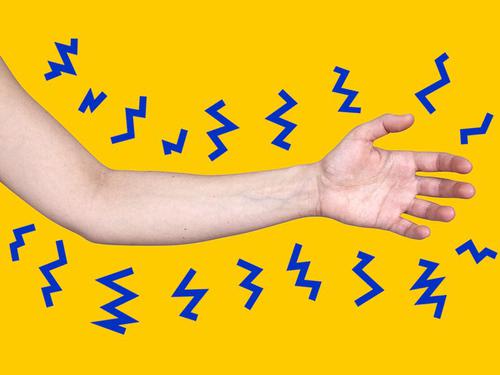 Another common cause includes the trapping of the Ulnar nerve between the bone and laying surface. Ulnar nerve, running below the medial epicondyle is a frequent site for entrapment. With a prior history of nerve entrapment due to previous fracture or inflammation of the joints, sleeping with a bent elbow may aggravate the trapped nerve leading to either numbness of the arm and hand or causing abnormal tingling sensations known as paresthesia. The person might wake up suddenly due to severe pain or he might wake up in the morning with numb arms and hands.

Deficiency of vitamin B12 can also be responsible for causing painful sensations. These sensations are not limited to any certain part of the body nor can they be attributed to sleep-related or previously mentioned issues. Painful sensations or paresthesia is not the only symptoms of vitamin B12 deficiency but is associated with confusion, weakness and walking difficulties. Vitamin B12 deficiency is common in vegetarians, alcoholics or in pregnancy due to an increase in the demands of the body.

Stroke can also lead to the sudden development of either paresthesevery one numbness in hands while sleeping since according to a study everyone in seven incident of stroke occurs during sleep. A stroke occurs as a result of a decrease in the blood supply of the brain either due to a blockage or a transient spasm of the blood vessel. In case of stroke, paresthesia or numbness is not the only symptoms but is usually accompanied by a number of other symptoms such as a headache, disorientation, heaviness on one side of the body or difficulty in speech.

Carpal tunnel syndrome consists of a group of sign and symptoms that are associated with the compression of the Median nerve at the wrist joint. It can occur as result of swelling of the joint in case of inflammation due to repetitive use of the hand at the wrist joint such as typing. The symptoms occurring as a result of carpal tunnel syndrome include weakness of the hand, tingling sensations, and weakness.

Numbing of the arms and hand, and pain sensation on waking up is most commonly due to an awkward sleeping position causing the blood supply to decrease which can be helped by changing sleeping positions or by exercising regularly, but if the condition is frequent and persistent with delayed return of sensations and other serious symptoms then you need to immediately to consult a licensed physician in case of a serious, life-threatening underlying condition.