TSH Levels: Everything You Need To Know

TSH or Thyroid Stimulating Hormone is one of the most common hormones in our body. As the name suggests, the hormone is produced by the thyroid gland and it stimulates thyroid function. TSH is produced by your brain's pituitary gland and TSH levels can be affected by numerous factors.

The chief factors are the thyroid hormones, T3 and T4, pre-existing levels in the blood. When the levels of T3 and T4 dip, the body increases production of TSH and vice-versa. Thyroid gland inflammation, genetics, iodine deficiency, and cancer may also affect the body's TSH levels.

Change in TSH Levels with Age

The level of TSH in the body changes as we get older. Any attempt to understand the 'normal' levels of TSH must include the person's age.

Babies born prematurely due to mother's thyroid condition could also suffer from neonatal thyroid conditions. Since it's impossible to tell if an infant is likely to be affected by a congenital thyroid condition, more and more doctors are advising for a TSH test as a part of the newborn screening program. Babies between 28-36 weeks old have a TSH normal range by age at 0.7-27 mlU/L. 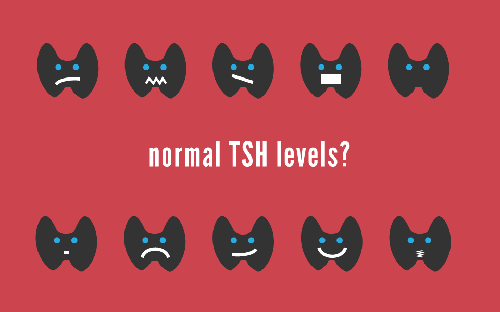 TSH normal range by age in the body is very wide and can also vary according to age, sex, diet, medication, and a whole lot of other things. It's important, therefore, to qualify what normal TSH range means.

High TSH levels indicate slow thyroid activity. Levels of TSH above 4.5 mlU/L are considered high according to the latest guidelines; however, a lot of physicians continue to treat 3.5 mlU/L as the threshold of treatment.

TSH levels of less than 0.4mlU/L are considered as low, indicating an overactive thyroid gland. In other words, it's producing more hormones than the body actually needs. TSH levels continue to be the thyroid function testing gold standard, but the interpretation of the levels continues to change as science advances.

The TSH levels are markedly increased in cases of hypothyroidism because the levels of T3 and T4 are lower than expected. This means that the thyroid gland isn't functioning as it should, hence considered underactive. Symptoms of hypothyroidism include fatigue, depression, constipation, weight gain, decreased heart rate, loss of memory, and coma.

Damage to the thyroid gland during surgery, Hashimoto's disease, or radiation exposure are the most common causes of hypothyroidism. Regular treatment includes taking thyroid hormone pills to make up for the deficit.

Among the most common causes of hypothyroidism, Hashimoto's disease refers to an autoimmune-mediated destruction of the thyroid gland. The symptoms are the same as those seen in hypothyroidism. Currently, there is no known cure. Hormone replacement therapy is advocated to help manage the symptoms.

Tips to Keep Your TSH Levels Within the Normal Range

TSH controls the thyroid gland that produces hormones playing a part in almost every bodily process. Here are some tips that help to keep the TSH levels within the normal range.