The Effects of Adderall to Your Body

Adderall is a stimulant prescribed for the treatment of sleeping disorders and attention deficit hyperactivity disorder (ADHD). Sleep disorders that are commonly treated through the use of this prescription include excessive sleep, hallucinations and sleep paralysis among others. Adderall is prescribed owing to its ability to act on the central nervous system by increasing neurotransmitters in the brain, which boosts attention and focus. Adderall is generically referred to as Dextroamphetamine and is one of the best-known stimulants helpful in increasing the ability to pay attention, control acquired behavioral habits and stay focussed on a given activity. The drug was approved by the US Food and Drug Administration for the treatment of ADHD back in 1996 for anyone 6 years or older. Despite the role played by Adderall in boosting attention in human beings, it has some side effects just like any other drug. Some of Adderall side effects are hair loss, high blood pressure, hallucinations, dizziness, dry mouth, and paranoia. 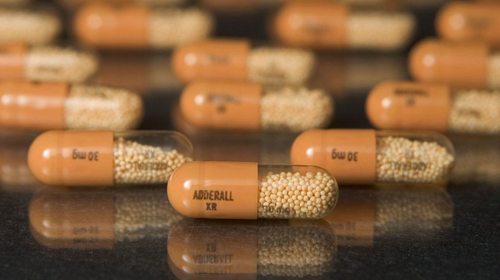 Side Effects of Adderall on the Human Body

Just like any other drug, Adderall alters the normal functioning of the body which causes some side effects as the body reacts. It is true that the drug helps stimulate the body to release chemical such as dopamine to boost your attention, however, the manner in which the body works under its influence is not the same as it would do naturally. There are many side effects of Adderall which may vary from one person to another depending on the level of use. Adderall side effects are categorized into physical and psychological.

Depending on the amount of Adderall taken by a person, its use may cause varying effects to your body parts and organs such as the heart, the kidney, and the brain. The main reason why some of this organs are affected is the fact that its use affects the normal function of the body leading to the perceived effects.

Adderall raises the levels of serotonin, norepinephrine and dopamine in the human brain altering the normal functioning of the heart. The three chemicals are responsible in regulating body emotions and pleasurable feelings in the body. When the brain senses that there is enough supply of the three neurotransmitters due to the influence of adderall, it stops producing them making it to have some changes on its circuitry. The higher the level of intake of the drug, the more intense the changes to the functioning of the heart becomes. The side effects on the brain mostly affects people who have not received adderall before, because the intake of the drug may cause overstimulation since the brain is already producing enough neurotransmitters. However, ADHD patients have reduced levels of neurotransmitters and therefore the prescription helps their brain to produce enough but not in excess.

Stimulants have the effect of constricting the blood vessels which can concurrently increase your blood pressure or increase the rate at which it pumps blood. In more severe cases, blood circulation can be interfered with, making your fingers and toes to become numb or painful. There are cases where the toes and the fingers can turn blue or red. Heart attack and stroke are the most serious side effects of adderall. In people with some pre-existing heart problems, a sudden death can strike and it is therefore important to seek the advise of a qualified medical practitioner before taking adderall.

The kidneys have the responsibility of removing waste from the body and filtering blood to remove extra water by forming urine. Excessive use of adderall may lead to damaging of the kidney because a toxic substance is introduced to your body in large amounts making the kidneys to overwork and lose optimal working conditions. The drug may also make you to retain urine for a long time and increase your body's temperature causing lots of pressure on the kidney leading to their failure.

It is not possible to hide the habit of taking adderall as a drug because it causes changes in personal moods, behaviors amongst other personal ways of doing things. Adderall use is threatening to the health of any of its users because one may not be in a position of controlling the changes that occur in their personality. Mood and behavioral changes may make the drug user to lose a job or destroy his or her intimate relationships. In some cases, these addicts will seem to talk faster than expected, exhibit incomplete thoughts which might lead to untols financial and relationship problems.

Adderall is a stimulant used to alter the central nervous system which means that if a person suddenly stops using it, he or she will experience depression. It would be very important to see a doctor anytime you need to quit using the drug because a his or her close look will ensure that you cope with the adderall crush appropriately.

Tips on how to avoid Adderall abuse

The answers to the question, what does adderall do to your body, implies that you should try to avoid its effects at all costs because side effects on abuse are fatal if used wrongly. The drug is an amphetamine which means that if using it for long periods of time, you might end up addicted. The following tips will help you avoid abusing the drug thus saving you from it's negative effects.

1. Stick to the doctors prescription

It is advisable to strictly follow dosage as directed by a physician. You should ensure that you take the amount prescribed by your doctor and for the appropriate duration because if you fail to follow this, you might end up taking more amounts than required. Taking adderall in excess may lead to addiction amongst other adverse side effects.

2. Talk about the risks involved

Most people admit to abuse adderall while in school or other institutions for their own reasons but what they fail to understand is the risk that is involved in abusing the drug. Its advisable that parents and teachers should educate the youths on the effects of the drugs at an early stage by telling them that it is a controlled substance which should be taken as directed by the physician to avoid its life threatening consequences.

3. Check for better alternatives in dealing with stress and workload

Most youths in school abuse adderall so that they can remain focussed in finishing their class work and other responsibilities they might have outside of class. Some of them will witness that the drug affects them negatively, but they will still feel that the drug has assisted them to achieve better grades. It would be more important if such students could be advised on better ways of managing their time and stress other than the drug, which might have some adverse effects on their future health. Or you could consult your doctor for further help to find more alternatives to replace it completely.