Getting to Know Your Baby’s Flutters

Pregnancy isn't an all glowing, mother-to-be bliss. Symptoms such as nausea, strange cravings and bloating may take the edge off the magic. When those first flutters of a new baby occur, you're well reminded that there is, indeed, a new life growing inside of you!

Regular flutter isn't only an exhilarating new discovery for a soon-to-be mother. It's also an indicator of a healthy, properly developing baby, one that is slowly growing into a full-fledged human being. Movement in developing fetuses indicates responses to the physical state of the mother, to the progression of sleeping, to the movement patterns that are unique to the baby, as well as to the external auditory and physical stimuli.

You can learn about your fetus by paying close attention to the unique patterns of movement occurring with it. In this article, we'll dive into what your flutters are telling you, as well as how to differentiate more consistently the sounds of your baby and your bubbling tummy.

Baby Flutters: When and How Often Should They Occur?

1. When are you supposed to feel the baby flutter?

It is agreed upon most pregnancy practitioners that baby flutters, often referred to as "quickening”, should be typically felt within weeks 16 and 25 of the pregnancy. However, this range often depends on how many times a woman has experienced pregnancy. Indeed, brand-new mothers often feel the flutters closer to 25 weeks, while women who are in the midst of their second or third pregnancies experience them notably sooner.

The frequency of flutters additionally depends on the position of the mother. As a matter of fact, quickening is most often felt when the mom is in a sedentary position, such as sitting still or lying down, while it tends to go unnoticed when the mother is more active.

Many practitioners recommend that mothers-to-be begin counting their fetal movements starting at week 28 of the pregnancy. While the exact number of kicks will differ from baby to baby, the average seems to be at least 10 fetal movements over the span of 2 hours.

2. How often do you feel the baby flutter?

As a general rule of thumb, the more your pregnancy progresses, the more frequently you should expect to experience baby kicks.

Early in the pregnancy, you may feel the flutters on occasion. As you enter your second trimester, the quiverings should increase. By the time the third trimester rolls around, the kicks could be as frequent as 30 times an hour! However, there's no fixed date for you to count on feeling those little kicks for the first time.

Your baby flutters not only depend on the trimester, but also on the time of day. Typically, babies are most active between 9 p.m. and 1 a.m., which is due to the changing blood sugar levels of the mother. In addition, a fetus' activity level can depend on some external stimuli, such as sounds and touch. 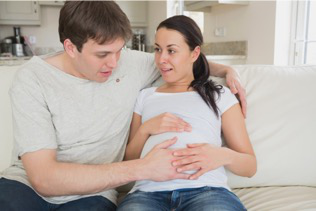 3. How can an expecting mother tell the difference between flutters and gas?

Well, this depends on who you ask.

Many mothers claim that gas pains tend to be more intense and noticeable, while baby flutters, as the name suggests, have the sensation of a tiny butterfly in the stomach, being, therefore, less noticeable than gases. Many pregnant women also claim that flutters tend to feel as though they exist at a surface level, while gas discomfort seems to occur deeper in the body. However, these differences can be subtle, which is why it's incredibly important for pregnant women to become extremely attuned to different sensations in their body, as these slight differences can be very telling as to whether gas or flutters are the culprits!

Although every woman's experience, when it comes to flutters, is different, there are potential issues that every expecting mother should be aware of. If you're further along than 28 weeks in your pregnancy and are noticing less than 10 movements in the span of 2 hours, a lack of response to external stimuli or a notable decrease in movement, these occurrences could indicate abnormalities in fetal development. It is recommended to consult a pregnancy practitioner, such as an OB-GYN or family physician if you experience any of these symptoms.

Baby flutters are a truly unique, magical experience, that serve as a reminder that you have a brand-new life growing inside of you. It's imperative for pregnant women to become attuned to the symphony of sensations within their bodies as their pregnancies progress. This will help them determine if their fetus is developing its ability to move and to respond to stimuli at a normal rate. Paying close attention to how the body feels will also help pregnant women become aware of whether they're gassy or if their baby is simply saying "Hi!”