Imagine asking the average person on the street "What is most likely to indicate to a woman that she is pregnant?” The first answer will probably be that she has missed a period. Even without knowing the science behind menstruation, most people are aware that women who are fertile but not currently pregnant have a period roughly every 28 days, when she releases an unfertilized egg. On the other hand, if the egg is fertilized, it implants within the uterus, and pregnancy, not menstruation, is the result.

Consequently, if you are still within your fertile years, and you are sexually active, a missed period is a good indication that you are pregnant. At this stage, the simplest method to confirm your suspicions is a home pregnancy test.

What's Wrong with the Test?

You can usually get a pregnancy test at your pharmacy, an online store, or even your local supermarket. The test involves checking your urine to see if the hormone human chorionic gonadotropin (hCG) is present. This hormone is only produced during early pregnancy.

Rarely, you may have both a negative pregnancy test and no period, but still be pregnant.

What Else Could Cause Missed Periods?

You've had a missed period and negative pregnancy tests, so what else could it be? Common reasons could be medical conditions, your age, or lifestyle factors.

Problems with the thyroid gland can cause all sorts of problems, from weight gain or loss, to mental issues such as depression, and difficulties with menstruation. If you suffer from an over-active thyroid gland, (hyperthyroidism), you may experience irregular periods.

You could also be on medication which is intended to alter your menstrual cycle. Using Depo-Provera or a Mirena device can mean that your periods are exceptionally light or even non-existent. Other medications which may interfere with periods include some chemotherapy medications or anti-depressants. You should always ask your doctor about any potential side effects of medication.

When you first start to menstruate, your periods tend to be irregular, so determining whether or not you are pregnant by any disruptions to your cycle will be difficult. Similarly, as you enter your forties, your periods will be less frequent. Once your periods stop for about a year or longer, you are likely to be in menopause. 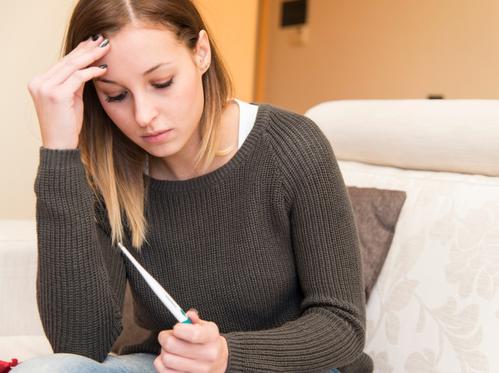 Missing Periods – When Should You Worry?

Unless you are in the early stages of puberty, are menopausal, or are actually pregnant, you should expect to have a period roughly every 28 to 35 days. If your periods are irregular, stop for no reason, or if you notice a change--for example, extremely heavy bleeding--there may be causes for concern.

If you are at all concerned with your menstrual cycle, consult your doctor.

Still Think You Are Pregnant?

Even if you have missed periods and negative pregnancy tests, you may still have other symptoms like nausea, bloating, and breast tenderness which indicate that a baby is on its way. Wait a few days and take the test again. Make sure you follow all the instructions and that the test hasn't been damaged or has passed its use-by date. And of course, see your doctor, who can provide a definitive diagnosis.

Check out this video for more information and for ideas as to what your next steps should be: