Which Are the States of Matter and Change of States

The best solid, liquid, gas definition is referring to them as states of matter. Matter is anything that occupies space and has mass made of molecules, ions, and atoms. There are five states of matter, also known as phases. They are: liquid, solid, gas, Bose-Einstein condensates (BEC) and plasmas. All these phases are made up of the same chemical properties but do change from one state to the other due to energy change. When you increase the temperature (energy) of a liquid, liquid molecules begin to move faster and vibrate more. Later, that liquid turns into vapor (gas). If you reduce the particles' temperature through condensation, that gas will change into ice.

The difference between all states of matter lies in their particles density. Below is an explanation of the same.

When trying to define "what are the states of matter” probably "solid” is the best starting point. Solid encompasses most physical things. Solid is better described as any matter that can hold its shape at room temperature and is difficult to crush or compress. This is because the particle density in solids is very high. In other words, particles that make solids are tightly packed and with no freedom of movement. That wall shielding you from blowing wind, that chair you are sitting on, and that table where your laptop is placed are all solids.

Molecules in liquids are not as compact as those in solids. Liquid molecules move more efficiently, slide past each other more often, and the space between them is bigger than in solids. That is why liquids flow, pour, and take the shape of the container in which they are put. When you move through a swimming pool, you will feel your body displacing some liquid.

The question of what are the states of matter can never get answered without touching on gases. Molecules which form gas have more freedom, move around faster, and collide randomly. Depending on the compression idea to define what the states of matter are, gas can get compressed more than liquid or solids. Gas leads to a question of what people mean when they say a container is empty. Does emptiness mean the absence of solid and liquid alone as if gas is not a state of matter? Open containers do contain gas which gets displaced by liquids and solids when the container is filled with them.

The air that you are breathing in is a gaseous mixture which contains oxygen, carbon, and nitrogen.

When molecules get energized (excited) beyond the gaseous form to the point of getting ionized (electrically charged), this forms the plasma state of matter. On earth, plasma is never a common phase. Particles, molecules or ions that form plasma have a higher kinetic energy (energy in motion) than gases. These particles are said to be ionized because they contain equal negative and positive charged ions.

Examples of plasmas are argon, krypton, neon, helium, radon, and xenon. Because they jump and collide (since they are electrically charged), they produce some light. Plasma's ability to become ionized and conduct light makes it possible for it to be used in fluorescent bulbs. Lightning formation during storms is attributed to plasma. Stars too are made up of superheated plasma balls.

In 1995, two scientists discovered BEC. They realized that at an absolute temperature (-273 degrees Celsius), molecular motion stops completely. The very molecules and particles end up achieving a similar quantum-mechanical state. After that, an atomic wave-like movement kicks in where atoms overlap each other and eventually form a superatom. Particles become indistinguishable after achieving the BEC similar qualities. Scientists say BEC will one day be used to make super –accurate clocks and atomic lasers. 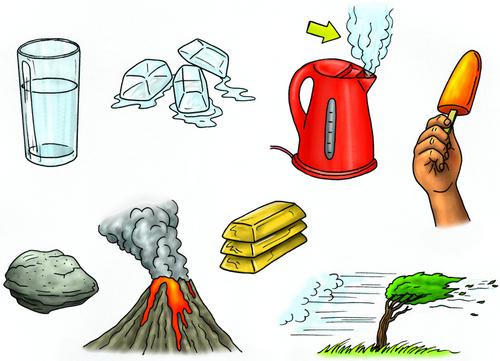 To understand states of the matter thoroughly, it is vital you know the changes of states.

When a solid matter is heated, its particles begin to move faster and vibrate more. When solid particles reach a melting point; a solid changes its physical state into liquid. Such solid matter change is attributed to particle activation.

Freezing point is a temperature point at which liquid particles slows down their movement and get clustered into a solid matter. The particles are aligned in a geometrical pattern of crystalline solid commonly referred to as ice.

Sublimation is the process whereby solid (ice) changes its phase directly into a gas (vapor) without first turning into a liquid. Sublimation happens when solid particles get heated at a temperature above the liquid boiling point. That high temperature increases the kinetic energy of water particles behold that of atmospheric pressure to cause the direct physical change (solid to gas).

Vaporization happens when a liquid turns into gas. In simple words, this occurs when the kinetic energy in liquid atoms increases, and they begin to jump more randomly. When kinetic energy increases beyond the boiling point, some particles get changed from the liquid state into a gaseous state known as vaporization.

When gases are cooled, they turn into liquid, and that is what is called condensation and deposition. It happens due to compression pressure or lowering of temperatures until the kinetic energy of the particles is unable to overcome intermolecular forces. This results in particle clustering to form a liquid type state of matter.